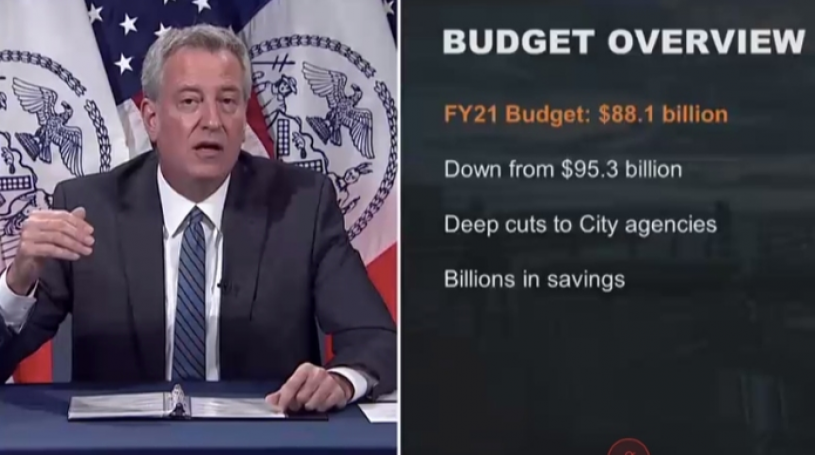 NEW YORK, NEW YORK — A once-in-a-century pandemic and a historic movement for police reform presented dual challenges for New York City's upcoming budget — and by Mayor Bill de Blasio's reckoning the city will meet them, albeit with some deep pain.

De Blasio on Tuesday detailed an $88.1 billion 2021 budget for the city that, by his admission, includes deep cuts to city agencies.

That's down from the already-lean $95.3 billion budget city officials projected before the coronavirus crisis sapped $9 billion from the city, he said.

"In many ways, the toughest budget challenge this city has seen in a long, long time," he said.

But the coronavirus crisis isn't the only challenge.

A police reform movement that rose after the killing of George Floyd put pressure on and exacted promises from city officials — de Blasio included — that they would shift at least $1 billion from the NYPD to long-underfunded parts of the city.

Many critics — including Public Advocate Jumaane Williams, who lobbed a last-minute threat to scuttle the budget altogether — looked at de Blasio's and the City Council's planned NYPD budget cuts called them illusory. "Occupy City Hall" protesters — who found themselves increasingly at the receiving end of policethey aim to defund — likewise panned the proposal.

De Blasio claimed the cuts represent real reform in terms of NYPD's responsibilities and would shift funds toward youth programs. He said it also cancels the NYPD's July class, meaning 1,163 new officers won't join the department's ranks — a much more effective reduction in force than a hiring freeze instituted on all other city departments, he claimed.

"It's a lot of redistribution but it's done in a way that's safe for this city," he said.

The redistribution in question will shift about $430 million from the NYPD toward summer youth programs, education and family and social services, de Blasio said. Another $537 million in NYPD capital funding will instead go toward NYCHA, broadband for NYCHA housing and Parks youth centers, he said.

Other "savings" from the NYPD will come from overtime reductions and reductions in contracts and non-personnel costs, de Blasio said.

Police officers will be shifted from administrative roles and roles now taken by civilians — specifically, vendor and homelessness enforcement — to keep the department's strength, he said.