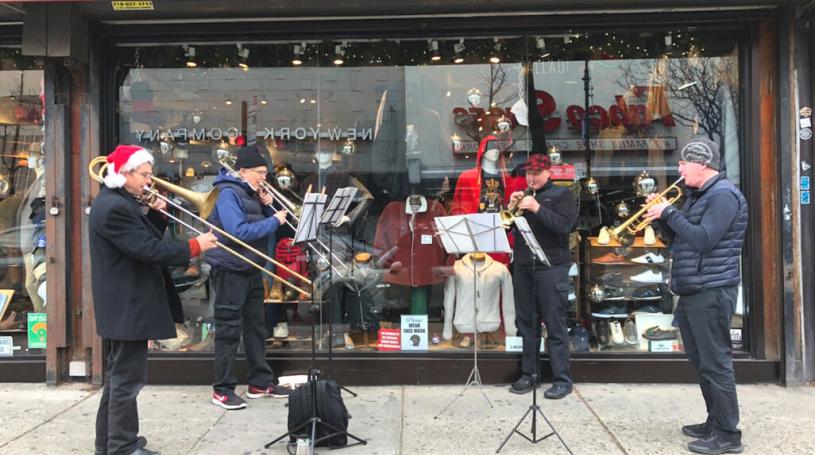 As with many other celebrations, the pandemic has halted traditional holiday tree lightings, appearances by Santa and hot chocolate gatherings with friends, but many of the business improvement districts across the borough are getting creative in order to preserve the holiday spirit while promoting struggling small businesses.

“It’s a hard situation,” said Leslie Ramos, executive director of the 82nd Street Partnership in Jackson Heights. “We need to shift the way we do things: We are doing holiday lights and having a tree, but we’re not having a tree lighting ... We need to safely keep people apart, but encourage people to come enjoy and take pictures.”

Ramos said she felt pressured to hold the annual holiday event because it was so popular with shoppers, business owners and the community, but knew it would be an irresponsible choice — if social distancing measures were adequately observed, Dunningham Triangle would only be able to accommodate as few as four audience members if the Partnership held its annual caroling festivities.

Instead, the 82nd Street Partnership has shifted its focus to growing its shops’ online presence in order to reach customers from inside their homes. Many of the Jackson Heights businesses don’t have websites, something the partnership is looking to change. Also, coverage on the Partnership’s social media pages of the people and businesses who make up the neighborhood is forthcoming, Ramos said, to establish a community connection in a time when everyone is asked to stay apart.

For those who prefer to do their shopping in-person, the partnership is committed to creating an environment where people follow the rules and shopkeepers feel comfortable enforcing them. They do want to encourage consumers to visit the stores and enjoy the holiday decorations even without the annual celebrations, she said.

“I wish I had something more exciting, but it’s creating best practices for the future: To get businesses ready and [learn] how to participate online,” Ramos said.

The Woodhaven BID had a similar idea to maintain a connection between businesses and consumers via social media. The BID is asking shoppers to submit photographs of their favorite Woodhaven stores for a chance to be featured on its Instagram page. A holiday gift guide that spotlights the small businesses within the district is in the works as well, which will be accessible by social media.

The Downtown Flushing BID took the social media focus one step further and initiated a selfie contest. The group decorates its 41-17 Main St. kiosk every year for the holiday season, but this year it was transformed into a winter wonderland “Holiday Art Installation” that encourages consumers to take a break from their shopping, snap a picture and upload it to Instagram using the tags “@flushingBID,” “SendFlushingLove” and “HolidayAtFlushing.” The top-five most-liked posts will each win a $50 Target gift card.

The Flushing BID hopes the cheerful holiday spirit will attract more consumers to the community and deliver a boost to local businesses, who are struggling to recover from the pandemic.

Ted Renz, executive director of the Myrtle Avenue BID in Glendale and Ridgewood, was dismayed to cancel the annual face-painting and balloon distribution that are a staple of the group’s tree-lighting celebration, but brought back another — the NYC Brass Entourage.

“We are going to have a four-piece brass band that is going to roam the street,” he said. The band made its debut performance Nov. 28, but will be back again Dec. 12 and 19 from 12 to 2 p.m. Typically, the band sets up at the 71st Avenue plaza while Santa chats with young shoppers, but this year they opted to move with the foot traffic.

On the days the NYC Brass Entourage isn’t jamming on the Glendale streets, pre-recorded holiday music will play in the background as shoppers hop from one store to the next and take in the displays scattered throughout the district. The tree and string lights were erected, despite the ceremony being canceled, and Renz said some small businesses participating in the Open Restaurants program could be planning to decorate their outdoor seating tents, though no official plans have been established.

As part of its ongoing “I Love Jamaica Avenue” campaign, the Jamaica Center BID will be releasing a special holiday mailer that invites residents to rediscover the shopping district, which has seen a handful of new businesses open during the pandemic. The campaign, which also includes a social media push, hopes to remind consumers of the benefits of shopping local and putting money into their own neighborhood.

“Now, more than ever, our Jamaica Avenue businesses need foot traffic, and it’s our goal to get everyone to embrace the “I Love Jamaica Avenue” mindset by shopping local,” said Executive Director Jennifer Furioli. The business district, in partnership with SEQ Clean Up, will also be hosting a neighborhood cleanup on Dec. 13 that will focus on removing litter from 161st to 163rd streets. Volunteers will be awarded coupons and discounts from local businesses in appreciation for their dedication to their neighborhood.