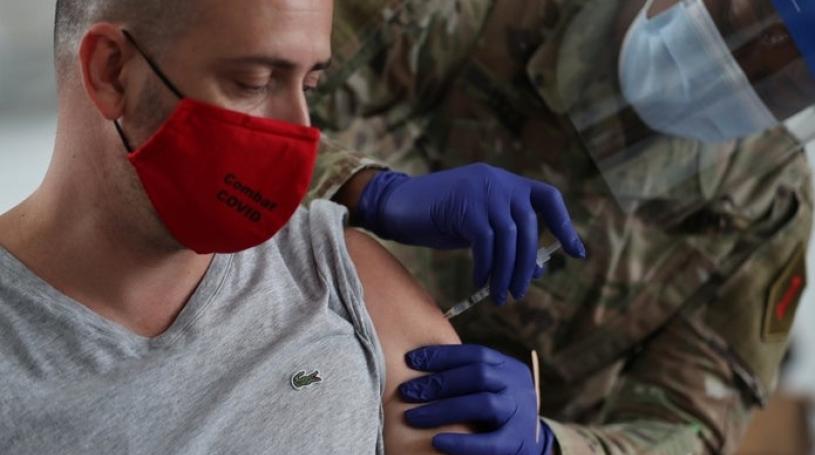 ACROSS AMERICA — A year ago Thursday, everything changed.

The World Health Organization declared the global coronavirus outbreak a pandemic on March 11, 2020. Restaurants and bars shuttered, companies and government agencies sent the employees home to work, and the U.S. economy went into a free fall as millions of people lost their jobs, temporarily or permanently, and small businesses quietly died along with more than 528,000 Americans.

It's been a terrible, heart shattering, destabilizing 12 months.

But not everything has been awful.

We're hard-wired to respond to emergencies and disasters with compassion and empathy, said Sandro Galea, the dean of Boston University's School of Public Health.

"Most people behave in a pro-social way after disasters and emergencies," Galea said in an email to Patch. "People do try to be compassionate when they can, after taking care to achieve basic self-preservation."

But this disaster has a wrinkle, and it's political.

"The first step is self-preservation. Then comes action to protect others," Galea said. "In some ways, that is not surprising and probably biologically programmed. The question is what is considered to be 'self-preservation.'

"In a pro-social society that should be the basics: making sure we are fed and safe," he said. "But if those notions extend to political affiliation, such as in the masking debate, they may preclude the more pro-social action like empathy."

The willingness to help a neighbor in need is one of the pandemic responses Patch readers said they wanted to endure post-pandemic when we asked them on Facebook to name one good thing that came out of the public health emergency. Based on the hundreds of responses we received from your neighbors, here are nine good things that came out of the pandemic:

Facebook user Kristi Emery said that with time on her hands, she's been able to address social needs exposed by the pandemic, especially the number of people facing insecurity.

"I'm more aware of the hungry [and] infirm, and I've had the precious times to create meals for Caring for Friends [and] donate to food banks. Neighbors caring for neighbors."

"The commonality of having to endure, persevere and overcome during the pandemic, has shown us that despite our differences, we are fully capable of working together to achieve a common goal," wrote Suzanne Sabransky.

"One of the best things for me was getting to spend more time with my family — especially my kids," Facebook user Mary McNabb Wilcox wrote. "They are teenagers that will soon be off to college and beyond, so I'm grateful for the extra time with them!"

"More time with family and yourself," Taylor Davis said, offers "a chance to get to know each other and your own priorities in life."

"Parents had more time to spend with their kids instead of being in the office all the time and less time having to commute," she wrote.

3. Our Respect For Essential Workers Has Grown

Essential workers were never sent home to do their jobs from the protective bubbles of their homes, and our appreciation for them grew, Virginia Hagan noted.

A Facebook user commenting under the Rhi Travels business account "got to see how undervalued teachers are."

"As a social worker," the person continued, "we have always been undervalued but to see we aren't the only ones is eye-opening."

"First responders, those hospital employees and Dr. [Anthony] Fauci worked above and beyond to help Americans," Beth Harden said. "I am so impressed and thankful that they stood by and fulfilled their job responsibilities."

Those front-line workers, especially those whose jobs lack glamour and prestige, saw their own value, too. The pandemic forced Tammy Fultz-Horvath, a certified nursing assistant, to stand back and reassess her talent.

"I have done more than I thought," she wrote. "Finally, I am proud of my job."

4. A Lot To Love About Losing The Commute

This time last year, offices and workplaces across America were emptying as employees were sent home to do their jobs. Some people commented on the gas, toll money and time on the road they're saving, though Kelly Seal Skonjeczny said that after a year of at-home work, "I miss seeing everyone."

Evidence that air quality has improved isn't just anecdotal. A NASA model released in mid-November notes that since the pandemic began, "space- and ground-based observations have shown that Earth's atmosphere has seen significant reductions in some air pollutants."

"With so many people off the roads and not flying, the air was cleaner, waterways became clearer," Marta Touloumes Keane said. "It was a global effort."

"I hope businesses continue to allow employees to work from home at least part of their week," Kellie Collier noted, "so the air doesn't just go back to how it was."

"I'd like to see office space turned into housing," she said.

5. The Close-Talkers Got The Message

For people who value personal space — the folks who identified with the "Seinfeld" reference to "close talkers" — the pandemic has made it easier for them to decline proffered hugs and other affectionate gestures.

"Honestly, I'm loving the social distancing," Facebook user "Jen Marie" wrote, sharing a sentiment repeated often in Patch's informal survey. "I'm one of those that hates when people get in my personal space, so this is great!"

Another Facebook user, who posts under the name of "Jules Anne," offered this: "If everyone could just stand farther away from me in public places for the rest of forever, that would be good."

"Honestly I am grateful for social distancing — it should continue post-pandemic," Andrea Kirchhoff-Brejcha wrote. "I've never been a fan of feeling a random person's breath near me."

"I hope people continue to keep their distance," wrote Jayme Hayes. "And wear their masks if they catch a cold so no one else gets it."

The desire to continue social distancing isn't universal — or even close to being universal.

"A hug — even a smile — makes the day so much better," said Donna Kearney

6. We Are Better Hand-Washers And Cleaners

Shannon Rhodas hopes grocery and other retail stores will continue to sanitize shopping carts. And, she wrote on Facebook, "people actually washing their hands" is a pandemic trend she would like to see continued.

"Stores and restaurants have been so clean!" Michelle Yohe Long said. "They have stepped up and incorporated more into their daily routines."

Sergio Calderon noted businesses are "cleaning everything, every day, every shift."

"If anything else, I hope people realize that 'just a little cold' could still be dangerous and will now think twice about attending parties and events when they feel 'a little cold coming on," wrote a Facebook user who posts under the name of "Amanada Anne."

"It's something I've always spoken about before the pandemic, especially with newborns, and I truly hope people won't forget this."

Robin Dembek said the pandemic forced Americans to think differently about their priorities.

"Really," she wrote, "I feel we needed to slow down and realize what things are more important to us!"

Birda Jackson learned to "let go of the unimportant things in life" and "to embrace the people who bring my life meaning," but also "to never let a day go by without saying 'I love you" because there are no promises."

Deb Nelson said the pandemic has "forced us to look within ourselves."

"It's made us search for enjoyment in the simple things, to start cooking and working out again," she said. "We've had to find different ways to connect with loved ones. I don't stand rooted in hostility and resentment. I've moved forward and adjusted. This past year has been horrible in many ways, but I've never felt calmer or happier within myself."

"I love the virtual events like virtual 5K's," she wrote. "So many more people are able to participate since they are not tied down to a particular day and time and so much more money was raised for the charities that I love."

Melissa D'Alesio noted "a general increase in humanity's appreciation for the little things in life."

Because the coronavirus disproportionately affects people of color and other minority groups and because the death of George Floyd last May ignited protests across the country to address systemic barriers, those issues have gotten greater attention, noted Jacqueline Harper.

"Racism has come out of the cracks," Harper said, noting that comments made in response to those situations provide a roadmap to "where the most help is needed" and where education efforts should be targeted.

"A nation divided is not a strong nation, a nation united is," she wrote. "Stop the hate."