City Residents Have Less of a Shot at COVID Vaccinations Than Other New Yorkers and Americans, Stats Suggest 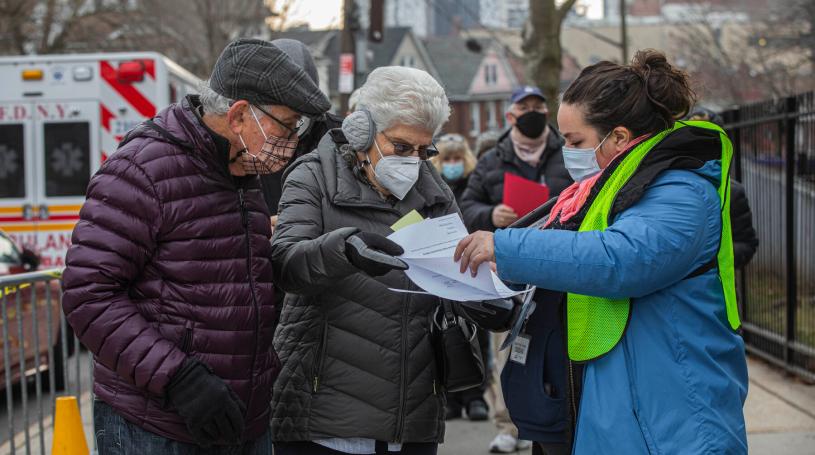 As New Yorkers struggle to snag a scarce COVID-19 vaccination, government data suggests that city residents have less of a shot at a shot than others in the state and much of the nation.

If it were a state, New York City would rank behind 33rd-place Maryland, with just 5.1% of its population injected as of Wednesday, versus 6.4% in the rest of New York State.

Since federal stats are slower to be released than local numbers, the five boroughs fall even lower in national rank.

New York State currently ranks 16th among the 50 states in the share of its population that has received at least one injection, not counting nursing home residents.

If city residents were getting vaccinated at the statewide average rate, more than 100,000 additional city residents would have gotten a shot already, on top of about 429,000 so far.

The disparities are in line with THE CITY’s recent report that more than a quarter of people vaccinated across the five boroughs live in the suburbs or elsewhere.

“We have got to be rigorous about making sure the vaccine in New York City goes to the people of New York City,” Mayor Bill de Blasio said at a news conference Wednesday.

Just hours later, NewYork-Presbyterian Hospital announced that its Washington Heights vaccination center would only accept residents of the five boroughs and prioritize those living in upper Manhattan and south Bronx.

The turnaround came after THE CITY revealed patients from Westchester and even New Jersey were getting shots at the Fort Washington Armory inoculation site while some local Spanish speakers were stranded without appointments or interpretation services.

On Wednesday, 23% of people who received first doses of the vaccine in the city were non-city residents, according to data from the Mayor’s Office. Those figures do not include the state-run Javits Center facility, which vaccinates any eligible New York State resident and does not release statistics on where its patients live.

“Folks who live in other counties should go to the distribution sites in their counties and get their vaccine,” the mayor said Wednesday. “But with the private hospitals, we have some more work to do.”

“The infrastructure to be able to scale up a massive effort to reach the whole adult population rapidly isn’t there,” said Wafaa El-Sadr, professor of epidemiology and medicine at the Columbia Mailman School of Public Health.

Federal guidelines state that people who are aged 16 to 64 with underlying conditions and other essential workers such as construction and food service workers should be vaccinated next.

El-Sadr and others call for a targeted, ground-up approach to improve the city’s vaccination campaign as eligibility expands beyond certain essential workers and people 65 and over.

“For some people, you have to take the vaccine to them,” said El-Sadr. “You can’t expect them to come to the vaccine.”

Surveys show skepticism towards the vaccine among Black and Hispanic Americans rooted in history of medical malpractice towards both groups.

Others say disjointed and sometimes contradictory communications related to testing and protective equipment during the pandemic did not help ease community concerns.

“The general mistrust in the medical field which has been fueled by the inconsistent messaging,” said Beverly-Xaviera Watkins, a social epidemiologist at the University of California, Irvine. Watkins formerly worked for the NYU School of Global Public Health.

“You have to ask residents, what is that you are concerned about and how you get past it,” she added.

“Who were the people on the ground during the pandemic getting them food? It was the local community groups who pulled their resources together,” said Watkins.

Meanwhile, de Blasio announced a plan to ramp up efforts to include opening a 24-7 mass vaccination center, once the city receives expanded doses from the federal government.

“We will be able to vaccinate half a million people a week starting in February,” said the mayor during a news conference Thursday, “but we need the supply.”